You may have wondered how if it would be possible to light up the pathways at night. Even better, how can you achieve it without using electricity? Here is an innovation that has garnered quite the attention it rightfully deserves: glow-in-the-dark concrete.

Yes, you read it right. It is not your ordinary type of concrete. Instead of using cement and the other standard materials used in making concrete, this discovery uses an altered form of these components. To be specific, the fine modules of cement are modified to come up with a variety of concrete that appears to glow at night. 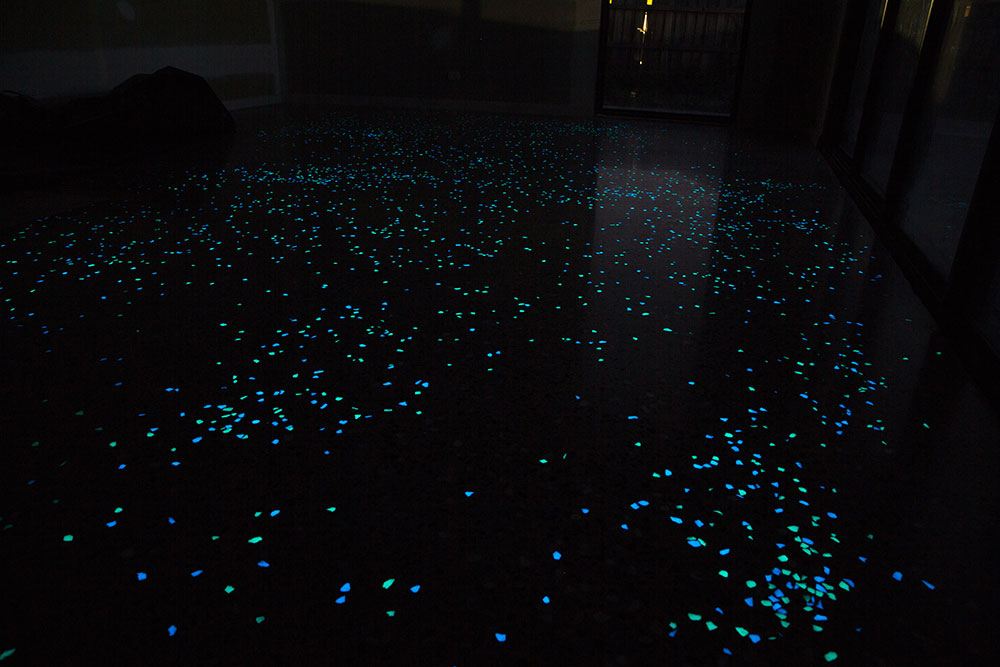 If you have an idea about concrete, you know that it is comprised of three main objects:

Contrary to what people usually believe, concrete and cement are not the same. However, it is common for these two terms to be used interchangeably. In reality, concrete is the finished product while cement is one of its ingredients. It acts as a binder when the other two components are mixed.

Creating illuminated or glow-in-the-dark concrete was not an easy task. For a time, it remained an idea that might not even become a reality. After all, cement is a solid and opaque material. Modifying its structure would be a major challenge for anyone.

Although the concept was first introduced in the late 90s, glowing concrete was introduced in 2016. It was announced that there was an attempt to create glow-in-the-dark pathways. The idea was to change some elements in the materials used to make concrete. The easiest was cement, which was why it was chosen for the alteration.

However, it was not as easy as it seemed. It started at the University of San Nicolas Hidalgo in Michoacán, Mexico. The concept was to use solar-powered cement that can take solar energy and transform it into the light to illuminate dark pathways. The material though did not make it easy for the developers because it was fairly dull.

Additionally, the materials used to create the glow-in-the-dark effect are mainly derived from plastics. Another problem associated with them is that they would only have a short lifespan. Typically, they would last up to three years, often having reduced efficiency after the first year. The materials quickly deteriorate and decay because of constant exposure to ultraviolet light.

From Gloomy Grey to Glowing Bright

To change its composition, the process of making cement was considered. One of the ways to create it is that it begins as dust or powder. Then, it will be mixed with water. Later on, this mixture will become a gel-like structure. Around it, there would be crystal flakes forming.

These flakes are considered unnecessary, a by-product that can be thrown away. However, the pioneers of illuminated concrete thought about altering the very microstructure of cement itself. This way, these flakes will no longer be present when the product starts to turn into a gel-like substance.

After a few tests, it was discovered that when these flakes or crystals are removed, cement can help absorb solar energy. Once it is added to the other components, the finished product, concrete, can emit the solar energy it has absorbed into light.

The research team also found out that when cement is in pure gel form, it can absorb light from the sun and emit it for up to 12 hours. Therefore, it is more than enough to light up walkways at night. The colours would either be blue or green. During the day, it looks white.

Why Use Glowing Concrete

As mentioned above, the problem with glowing materials is that they can deteriorate extremely quickly. They do last for a year and even up to three years. However, homeowners are not prepared for the yearly replacements. No one would be willing to change their concrete every year just to make sure it glows at night.

The good news is that you do not have this issue with glowing concrete. The innovators made sure that this new form of concrete can illuminate the area for up to 12 hours. Additionally, with proper maintenance, it can last for up to a hundred years.

The concrete mixes comply with the Australian Standards, particularly AS1379, which details the specifications of concrete. You also do not have to worry about this type of decorative concrete. It has the same materials that make it sturdy, including aggregates. The process to create glowing cement is environmentally-friendly as well. Water vapour is the only thing released in the air.

You may not think about it but it can help reduce your power bills. Save the extra money for other bills and expenses because you will no longer need to install lights outside the house. Plus, it is certainly good for the environment.

Finally, you cannot deny how incredibly beautiful glowing concrete is. It adds extra “coolness” points to your property. Your neighbours will want to have it in their yard as well! Glowing concrete will light up the dark spaces around your home, which increases the feeling of security when you enter or leave.

Best Places to Use Glow-in-the-Dark Concrete

The beauty of this product goes beyond its looks. Since it is concrete that emits light, it can be used and installed anywhere. If you can use ordinary concrete in your property, such as the walkways and even your pool deck, you can use illuminated concrete as well.

Often, you will find glowing concrete in patios and pool surrounds. They can brighten up the area, making them look more dazzling at night. Illuminated concrete is also useful in driveways and pathways. For a romantic evening, it can be installed in alfresco dining areas.

Homeowners and businesses also use glowing concrete for the stairs. It not only improves the overall appeal of the property but also heightens its safety.

If you have an outdoor area that needs illumination at night, you can install glowing concrete. You will no longer have to use nightlights, which can help save power. It is even possible for you to have indoors, although you may not get as great as the results when it is installed outdoors. Still, the material is designed to absorb even artificial UV radiation. It is why you will still see it glowing even when you have it installed inside your home.

The reason for it is that glow-in-the-dark concrete takes in light and energy from the sun. Therefore, you cannot get as much power as you can when you have this type of concrete inside the house. Nevertheless, it will still perform well, especially if it is installed in an area that receives plenty of sunlight. 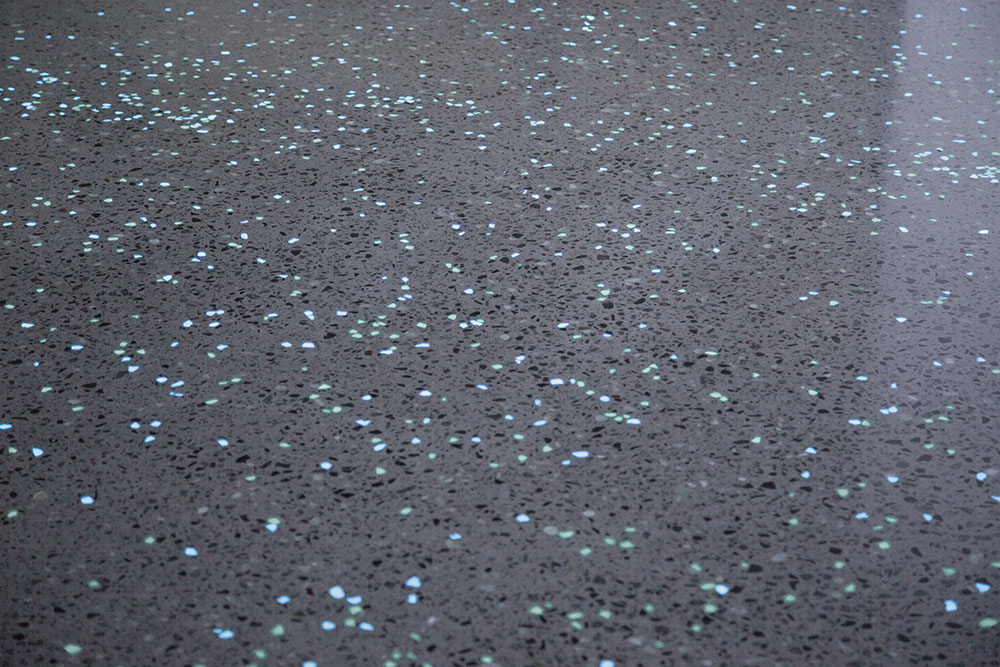 Where is Illuminated Concrete Used in the World?

Glowing concrete is quite versatile. You can find it in walkways, stairs, and garden beds all over the country and other parts of the world as well. Some have chosen to install it in their pool decks, driveways, and benchtops. You can find it in indoor flooring, too.

Its luminosity can easily replace neon paints, which are often used with the same purpose. For instance, Texas A&M University uses neon green paint as markings to improve road safety. After all, the area is a busy cycle lane in Houston, which was why there are luminescent patterns on the pathway.

The glow-in-the-dark paint is not as poetic as illuminated concrete. For an even better and more sophisticated effect, glowing cement is used in other parts of the world.

Applications of luminous cement are still not as widespread. However, many places in Europe have adopted this style. An example is a bike lane in Lidzbark Warminski in Poland. Glowing concrete is applied on the bike lane, making it a unique experience for the bikers who like to ride at night.

A 100-metre section glows in turquoise in the morning as it takes in sunlight at this time. When the sun goes down, it shines blue, which helps the bikers and even the passers-by to see clearly at night. The surface is made of fluorescent materials, which absorb the sun’s rays then emit them later on. The pathways remain lighted up for at least 10 hours.

Another is another bike lane close to Eindhoven in the Netherlands. It has been around since 2014 but was improved to light up the 800-metre bike lane. A Dutch artist designed the pathway to copy and immortalise Vincent Van Gogh’s artwork, “The Starry Night.”

The road surface absorbs light from the sun. When the sun sets, the pathways light up, emitting green and blue lights. It is as if you are looking at the famous painting right on the ground. The purpose of the bike lane is not to serve as entertainment for pedestrians and cyclists. The lights were designed to generate landscapes that avoid the use of energy as much as possible.

Your home could be the next one with a luminous pathway. You can choose whether you have it installed indoors or outdoors. Contact Decorative Concrete WA to give your home the glowing character it needs.

ALERT: A scammer posing as our employee has reached out to clients advertising on third party websites. When receiving a quote from us, please ensure the quote comes from info@decorativeconcretewa.com.au or 0467 637 485.